The Last Lecture I Never Gave

In July of 2017, I resigned as the VP of Design at Etsy. As I was letting people know and preparing for a broad announcement, one of the common questions I’d get was “when is your last lecture?” I never gave that lecture, so here it is. 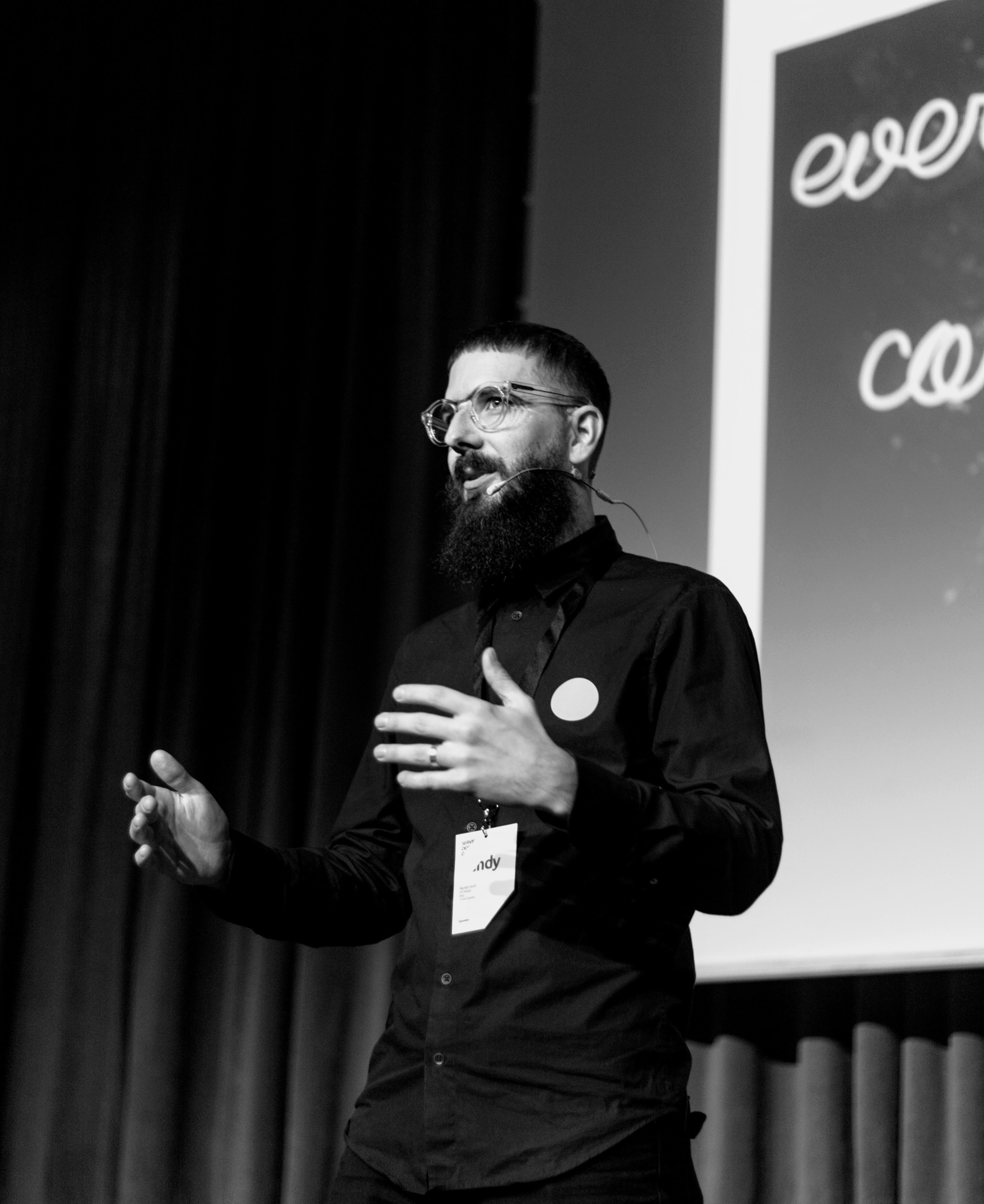 There is a tradition of last lectures at Etsy. The tradition began in the engineering team in order to surface hidden, but critical, knowledge embedded within team members that is likely to cause surprises if it’s not passed on. For example, “Hey, you may have noticed that such-and-such system stopped failing about 6 months ago, and that’s only because I monitor its usage and manually reset it every couple of weeks. We haven’t yet prioritized an automated solution for that, but maybe now is the time!” Or, “you may be wondering why we never launched Feature X, even though all of the A/B results looked fantastic. Here is the backstory...”.

The program evolved beyond engineering to be a ceremonial event for many people who were leaving, though mostly remained limited to engineering, product, design, C-suite executives, and very long-timers. Every once in a while a person delivering a last lecture would throw shade. Most of the time that was light-hearted. I loved these moments.

The fact that “last lecture” was the moniker that stuck still baffles me. In hindsight, I wish I’d proposed an alternative. There’s a significant external precedent for a last lecture, and it’s centered around mortality. It’s a book literally titled The Last Lecture based on a lecture Randy Pausch gave at Carnegie Mellon University that turned into a brief but impactful popular culture obsession. It’s a powerful read and a New York Times Bestseller. He later redelivered the lecture on The Oprah Winfrey Show.

I decided I didn’t want to give a last lecture in lecture format. I’d stood up in front of the company many times. It seemed to me that the focus should be on the team and the future.

In revisiting the materials for this post I found this sketch. It was a self-rejected idea for an animation, attempting to illustrate how a team grows and then disperses into small versions of itself. I’m humored by the fact that I wrote both “Really PUMPED.” and “OPTIMISM” in the sketch. This is perhaps a good summary of my personality:

Two–going on three–years later, it’s easier to publish this. The time passed gives me more certainty about the content, edited not in the emotions of the moment, not to justify time spent as time well-spent, but with a calm mind and reflective intent.

My Last Lecture at Etsy

The work you do informs who you are and vice versa.

As most of you know, I met my wife while working at Etsy. Eventually we worked here at the same time. I was reflecting recently and realized she’s only ever known me as the person leading design at Etsy. I’m excited for her to know me as someone else. A person with a different set of things in my mind and something else occupying my working hours. I’m excited to know that version of me too.

That wasn’t the driving factor for my decision to leave Etsy*. Once I knew I was ready to leave, it did become a primary motivation to move through the departure process. [*a note from 2020: I hope to share that story some day.]

Part of that departure process is sharing some reflections and lessons learned with you. Where possible, I’ve attempted to point out where these lessons emerged and where they’re connected with other concepts.

I once sat at a sidewalk cafe with the COO of a well-known outdoor company and his wife, chatting about all sorts of things and enjoying a glass of wine in the sun. I met them because of Etsy, but not for the reason you might imagine. We met when he and his wife had driven from western PA to NYC to deliver a huge vintage sign we'd purchased from her Etsy shop.

I’ve toured Etsy sellers' stores, studios, and homes. We’ve invited them into ours. That’s where I’ve been reminded most of the human connections behind commercial connections.

Don’t get stuck in a comfortable office. As good as it is, it’s far better outside.

Strategy is a commodity.

I’d never heard of Peter Drucker before coming to Etsy. Chad Dickerson introduced me to his work, as I’m sure he did for many of you. I can’t remember which book or article first set off the wave of Drucker study for me. What I can say is that we probably should have had a Drucker Disciples group. His long-form content, philosophical management opines, and practical advice mostly hold up even after all this time.

Part of his power is his memorable quips. There’s a lesson in there on the portability of snappy language. This is one of my favorites: “Strategy is a commodity. Execution is an art.”

Team members have said to me that they want to be “more strategic” and think that getting more senior roles or moving into management gives them permission to do so. The reality is you can be strategic, and should be, long before anyone expects you to. In fact, it should be independent of expectation and permission. But remember, strategy without follow-through, ideas without execution, aren’t worth much.

It’s so easy to get excited about the hot new thing, the exciting new tool, the latest industry trends. There’s nothing inherently wrong with that, but if it’s at the expense of understanding and exercising our basic skills, something’s amiss.

Value simple, tried-and-true methods, loyal friends, and things that hit you in your gut.

Use artifacts to communicate.

Each of these designs has a role to play, and on the surface can appear to be the same. Help others understand your intentions. It’s your responsibility to be clear about which one – or several – of these you’re doing and make choices that best support that intent.

Many of us here at Etsy remember Rebar, a restaurant/bar/movie theatre/event space that was a few blocks away from our Washington Street office. For my first few years at Etsy, it was a regular stop. Sometimes for lunch, after work drinks, dinner, or a movie. We’d take candidates there on an interview day and teams there to celebrate a launch. It held a special place in many peoples’ hearts. Great vibes, massive beer collection, moody environment, and good memories.

Then one day, things started to change. Why would Rebar only be open a few days a week? Why was the food quality getting worse? Employees seemed cranky. Then the news started to come out: unpaid bills, cancelled wedding receptions with no refunds, sloppy bookkeeping.

Now, I don’t know the people behind Rebar. I never met them. I doubt they were proud about what went down. What I do know, is some bad decisions led to bad outcomes. And to deal with those outcomes, more bad decisions were made.

You must treat people with respect. You must make good on your commitments.

If the numbers don’t add up...well, then they don’t add up. Fix it, or cut your losses. Don’t lie to yourself or the people around you.

Don’t underestimate the power of contrast.

Central Park is one of the gems of New York City. Most of you reading this work and/or live in New York City and know this first hand. If you’ve visited you’ve experienced it too.

I believe there’s a highly underrated component of its success: contrast. Its magic, its utility, its beauty are all heightened by the context of what’s around it.

Be quiet when others are loud. Speak up when no one else is.

Be quick when others are slow. Be patient while others hurry.

Think beyond “a seat at the table.”

I’ve been part of a design conversation for at least a decade that centered around some version of designers getting a “seat at the table.” Variations of it include being part of strategic decisions, being treated as important, having a designer executive or some other symbolism, being understood, being compensated fairly.

In many organizations, including this one, we’ve got it. And so what? What will you do with that now? I won’t pretend this is the same everywhere, but I think there are many proverbial tables with many designers in seats at them. Let’s use them well.

If you’ve been spending all your time talking, thinking, and arguing for a position of influence, you better have something to offer beyond the continued advocacy of your own discipline. Executive teams demand more in exchange for that seat than reasons why your team needs resources, attention, or respect.

My recommendation: take your seat and don’t talk about design. I believe it’s simpler but harder. We have to help everyone succeed and use our unique perspective as designers to do so. Learn about the challenges and needs of everyone, not only the challenges of designers. Design can be helpful nearly everywhere and we could get started anywhere. Look for areas that are high-impact and reasonable effort. Find a partner on the executive team and commit to helping solve their problems with them. When it goes well, they’ll become the advocate for design and you can continue on seeking other problems to solve.

Our collective experience is challenged. Design can embed humanity in the mundane but necessary parts of modern life.

Yes, design is good business. Let’s not let the approval and support of business journals and management consultants be an end to design's journey. Build on the credibility, momentum, and spotlight that design has gained. Continue to build on it for business, and please build on it for so much more too.

Take a long view. Be willing to change your mind.

One of the often quoted Amazon Leadership Principles is “strong opinions, loosely held.” Intellectually, this makes sense to me. Fortitude is admirable. Stubbornness, not so much.

I’ve always felt that this principle is powerful, it’s used most often in near-horizon situations: how to build something, how to organize a team, what the metric for success of the project should be. I’d like to extend this idea further in time, and challenge each of you to form opinions about the future. Use that opinion to provide perspective on the choices you make today:

When you learn new information about how the future is shaping up, form new opinions, make different choices. Tell people you’ve changed your mind and why you’ve changed it.

Do serious work, but don’t take yourself too seriously.

Life’s short. Being a human is already hard enough. Let’s have some fun while we do this.

Thanks to editors on this essay: Mike Brittain, Chris Palmieri, and Josh Silverman (my dear friend, not current Etsy CEO)